Penny Anderson is a singer, songwriter, crankie maker, composer and teacher based in Pittsburgh, Pennsylvania.

I've been fascinated all my life by the oddity, humor, and strange beauty of old songs. I know hundreds of songs from American, British, and French traditions, which I sing unaccompanied, with autoharp, concertina or, very occasionally, with fiddle or hurdy-gurdy.

I also make original songs for solo, small group, or choral performance. You can hear my early work in this vein on my somewhat solipsistic home-made CD, Music at Home.

For two years I had the pleasure of singing with the lovely Daphne Beers and Jake Kilburg as Monongahela Harmony, singing a lot of early music, some 20th-century music, and our own compositions. Although Daphne has moved on, Jake and I have renewed our singing partnership. We're working on a program with guest artists Nora and Kip Rodes. 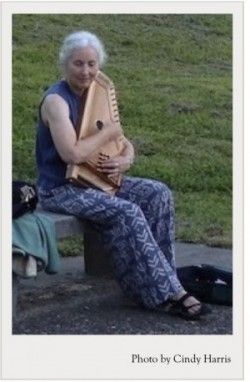 I love many kinds of singing, including shape-note singing, and I organize a regular monthly sing in the Pittsburgh area. Some of my compositions are strongly influenced by styles of the shape note tradition, and I've had a piece published in the thrice-yearly online publication The Trumpet.

My curiosity about the origins of the tradition led me into a lot of reading and listening, and ultimately into teaching a course on the choral music of revolutionary-era New England for the University of Pittsburgh's Osher Lifelong Learning Institute and a similar mini-class for the Augusta Heritage Institute.

In other teaching and leading roles, I act as music director for the all-woman chorus Sorora, and for the last few years I've had the very great pleasure of leading vocal warm-ups at the Augusta Heritage Center's Vocal Week.