We were Monongahela Harmony (Penny Anderson, Daphne Beers, and Jake Kilburg) – and our motto is "If we like it, we sing it!"

Alas, Daphne has gone to seek her happiness elsewhere. Jake and I carry on and hope eventually to recruit another singer. For now, the fantastic Nora Rodes is helping out.

Here's my new piece for just Jake and me, In the Time Of, for the covid winter of 2020. 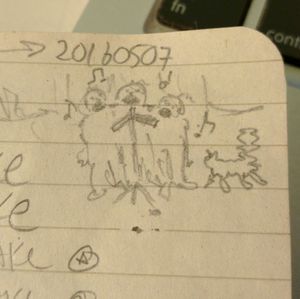 We came together as a trio in the spring of 2015 after singing for the Polish Hill May Day parade and discovered we shared similar ways of working and a love of the same music. We started with Jake's The Old Astronomer and soon expanded to some of Penny's music (Mass For the Unbelievers, at last!), more of Jake's pieces, some early New England music (kind of "pre-shape-note" style), a piece by Gerald Finzi, and some medieval pieces. We want to sing more medieval music (Landini!) and some of the more oddball Christmas repertoire, and lots and lots of other things.

Here are some (now no longer) recent recordings we made. At Daphne's place, scaring her cat Emma.

This lovely song is one of a group of settings Jake is making of 19th-century poetry.

When I am dead, my dearest,
Sing no sad songs for me;
Plant thou no roses at my head,
Nor shady cypress tree:

And dreaming through the twilight
That doth not rise nor set,
Haply I may remember,
And haply may forget.

This shape-note classic is usually sung in four parts, but a three-part setting was published in 1796. We sing it here in singing-school style "with the shapes", that is, with the fa-so-la syllables, before the words.

Lo! what a glorious sight appears
To our believing eyes!
The earth and sea are passed away,
And the old rolling skies.

From the third heav'n, where God resides,
That holy, happy place,
The new Jerusalem comes down,
Adorned with shining grace.

His own soft hand shall wipe the tears
From every weeping eye,
And pains, and groans, and griefs, and fears,
And death itself, shall die.

O blessed stock from which Christ was born:
how glorious is the virgin who gave birth to the king of heaven.

Another in Jake's series.

Oh my soul, my soul!

Though my soul may set in darkness,
It will rise in perfect light.
I have loved the stars too fondly
To be fearful of the night.

This is the Gloria for the Mass For the Unbelievers. I am so happy to finally hear this piece!

For I will consider my cat Jeoffry.
He is the servant of the living God, duly and daily serving God.
At the first glance of the glory in the East he worships in his way,
By wreathing his body seven times round with elegant quickness.

For having done duty and received blessing, he begins to consider himself.
He looks upon his forepaws to see if they are clean.
He sharpens his paws by wood.
He washes himself and rubs himself against a post.
He looks up for his instructions, and goes in quest of food.

For having considered God and himself, he will consider his neighbor.
If he meets another cat, he will kiss her in kindness.
And when he takes his prey, he plays with it to give it a chance.

For when his day’s work is done, his business more properly begins.
He keeps watch in the night against the adversary.
He counteracts the powers of darkness by his electrical skin and glaring eyes.
He counteracts the devil, who is Death, by brisking about the life.

For in his morning orisons he loves the sun and the sun loves him.
He is a mixture of gravity and waggery.
There is nothing brisker than his life when in motion.
And there is nothing sweeter than his peace when at rest.
He purrs in contentment when God tells him he’s a good cat.

The Benedictus for the Mass.

Like most (all?) of Billings's work, Creation was composed for four voices, with the melody in the tenor. Lois Hurt brought this piece to our monthly shape-note sing and we were so taken with it that Penny adapted it for our three voices. It is so much fun to sing! Those sour-faced Puritans had some good times!

When  I with pleasing wonder stand,
And all my frame survey,
Lord, 'tis thy work, I own thy hand
Thus built my humble clay.

Our life contains a thousand springs,
And dies if one be gone.
Strange that a harp of thousand strings
Should keep in tune so long.

The first stanza is from Watts's metrical version of Psalm 139; the second from one of his hymns. [Source: The Complete Works of William Billings, vol. IV; ed. Karl Kroeger]. According to Edward B. Davis ("Robert Boyle as the Source of an Isaac Watts Text set for a William Billings Anthem," The Hymn: A Journal of Congregational Song, 53 (2002), 46-7), this hymn was inspired by an essay by the chemist Robert Boyle. Boyle, as every schoolchild knows, discovered "Boyle's Law" relating the pressure and volume of a gas, but he also practiced alchemy and wrote on theological subjects and had a scientific collaborator in his sister, Katherine Jones, Viscountess Ranelagh.

The passage that inspired Watts is found in Boyle's Occasional Reflections upon Several Subjects.

...how many Bones, and Muscles, and Veins, and Arteries, and Grisles, and Ligaments, and Nerves, and Membranes, and Juices, a humane Body is made up of, I could not have been surprised, that so curious an Engine, that consists of so many pieces, whose Harmony is requisite to Health, and whereof not any is superfluous, nor scarce any insensible, should have some or other of them out of order, it being no more strange that a Man's Body should be subject to Pain, or Sickness, than that an Instrument with above a thousand Strings (if there were any such) should frequently be out of Tune....

Showing not only the almost incredible verbosity of 17th-century English prose writers (I left out most of it!) but also the superiority of poetry over prose.

I found this lovely piece in four parts in a facsimile copy of John Wyeth's Repository of Sacred Music (1820). Later on I discovered it has been reprinted in Norumbega Harmony. I loved the piece, but adjusted the rhythm a bit to make the fuging section entrance smoother, and found another verse from Watts to go with the single verse printed by Wyeth. When Jake and Daphne and I decided to sing some more shape-note music, this immediately came to mind (I had tormented the monthly singing group with it once, with not much success) and I arranged it for three voices. It is so different in style from other pieces of that time and place that I'd really like to know where it came from. Could it be among the English imports of the 1750s–1770s? Its lyrical feel suggests that as a possibility. I've run across a few pieces by Anonymous in this repertoire and I always wonder if the composers were women, who, after all, went to singing-school too, which was pretty much the limit of the New England composers' musical training.

God from his cloudy cistern pours
On the parched earth enriching showers,
The grove, the garden, and the field
A thousand joyful blessings yield.

We love this piece, so challenging and so rewarding!

I have loved flowers that fade,
Within whose magic tents
Rich hues have marriage made
With sweet unmemoried scents:
A honeymoon delight,
A joy of love at sight,
That ages in an hour
My song be like a flower!

I have loved airs that die
Before their charm is writ
Along a liquid sky
Trembling to welcome it.
Notes, that with pulse of fire
Proclaim the spirit's desire,
Then die, and are nowhere
My song be like an air!

Die, song, die like a breath,
And wither as a bloom;
Fear not a flowery death,
Dread not an airy tomb!
Fly with delight, fly hence!
'Twas thine love's tender sense
To feast; now on thy bier
Beauty shall shed a tear.

Here are two of our recent pieces that we recorded even though we are still in the early stages of work on them:

This is the latest of Jake's series.

The hope I dreamed of was a dream,
Was but a dream; and now I wake
Exceeding comfortless, and worn, and old,
For a dream's sake.

I hang my harp upon a tree,
A weeping willow in a lake;
I hang my silenced harp there, wrung and snapt
For a dream's sake.

Lie still, lie still, my breaking heart;
My silent heart, lie still and break:
Life, and the world, and mine own self, are changed
For a dream's sake.

The latest installment of the Mass for the Unbelievers. (A new version from a practice session this July.)