Monthly singing: we sing from the Denson Sacred Harp the first Saturday each month 1:00–3:30 PM at the Church of the Redeemer at 5700 Forbes Avenue in Squirrel Hill. Please be vaccinated against covid if possible! Masks are optional; you might consult the latest from the Allegheny County Health Department to help you decide whether to mask. In September and October 2022 we'll sing on the last Saturday of the month, then resume our regular schedule of singing on the first Saturday of December.

Weekly singing: our weekly singing at the Pittsburgh Theological Seminary (616 N Highland Ave) is paused for the moment. We hope we'll be able to resume.

To get ourselves through the first few months of covid time we created this overdubbed recording of Granville 547 by the incomparable Judy Hauff.

Thanks to everyone who's sent me something! The singers are Nick, Susan, Amalia, Penny, Heidi, Daphne, Leslie, Flawn, Phil, Karen, Jo, and Peter. Hearing your dear voices is such a pleasure!

What is shape-note singing?

We had a really nice sing in July 2019 in the Covenanter church building (built in the 1830s) at the Depreciation Lands Museum.

A short report on our outreach of November 4th 2018 in The Kittanning Paper.

Singing in the Evangelical Lutheran Church in Worthington PA:

After singing in the tent in Schenley Plaza (thanks to Donna Isaac of Calliope for organizing!). Thanks to Jo Schlesinger for the photo! See here for more pictures. 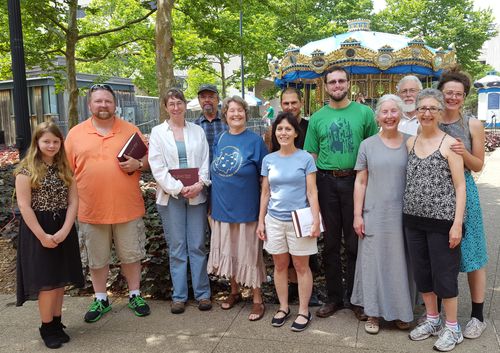 Shape note singing is a descendant of the usually unaccompanied harmony singing practiced in 18th-century New England churches. Before that time, the congregations sang hymns and metrical psalms in unison using a lining-out procedure: the deacon (or minister) would read the verse, then the deacon "set" a line by singing it to the psalm tune, and the congregation in response sang the same thing (in theory!), and the setting and singing proceeded line by line. No organs or other instruments, not even a pitch-pipe, were allowed in the New England churches, so the poor deacon had quite a job, as everyone who has "pitched" for shape-note singing knows (but the deacon was responsible not only for the pitch, but for knowing the tune and leading it). Here's a bit from the diary of Samuel Sewell, deacon for Boston's South Meeting House:

Dec. 28, 1705. ... Mr Willard preaches from Ps. 66.20 very excellently. Spake to me to set the Tune; I intended Windsor, and fell into High Dutch; and then, essaying to set another Tune went into a Key much too high. So I prayed Mr White to set it; which he did well, Litchf. Tune. The Lord humble me and instruct me, that I should be the occasion of any interruption in the Worship of God.

And since the excellent Alan Buechner further refers me to the composer William Billings's introduction to his Continental Harmony (1794), I can't help sharing an example of Billings's inimitable sense of self-deprecating humor on the subject of lining-out. After condemning the practice at length as "absurd", he adds a footnote further complaining that it gives people an excuse to avoid buying hymn books since they don't need them in church, adding I confess this remark should have been inserted in the body of the work, but it did not take place in my mind till the pages were full; therefore I plead benefit of margin, a glorious privilege, for which bad memories and dull authors cannot be too thankful.

Here's an interesting short piece by the writer Charles Fergus on Ananias Davisson, author of Idumea, and his book The Kentucky Harmony, which was so important in spreading shape note music as the frontiers expanded.

In Melville's Moby Dick (chapter 22), when the Pequod sets sail from Nantucket on an icy Christmas evening, Captain Bildad, the pious Quaker who owns part of the ship, pilots her out of the harbor. The narrator describes the scene as follows:

As the old Craft deep dived into the green seas, and sent the shivering frost all over her, and the winds howled, and the cordage rang, Bildad's steady notes were heard.

"Sweet fields beyond the swelling flood,

So to the Jews old Canaan stood,

While Jordan rolled between."

Never did those sweet words sound more sweetly to me than then.

At the Augusta Heritage Festival 2015, Dr. Ron Pen of the University of Kentucky did a presentation in honor of Jean Ritchie (who died the previous spring). It seems the Ritchie family's custom was to get up before dawn on Christmas morning and go out singing carols. One of the songs they sang on these occasions was Wondrous Love. I had the privilege of participating in the singing of this hymn for Ron's presentation.

Thanks to Michael Kearney!